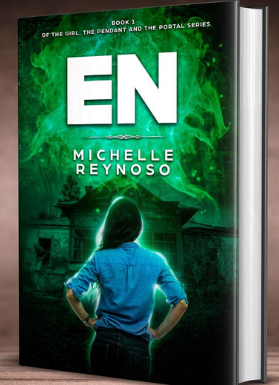 EN (The Girl, the Pendant & the Portal)

Life was easy, before everything went to shit.

Two locations - US and Enlitra (other world)
Era

After the death of her mother, high school senior Faith McDaniels stumbles onto a series of strange events that puts her on the precipice of discovering that pendants & portals, other worlds, & energy-bending are not just ideas from a fantasy story, but her doorway to extraordinary abilities.

When Seventeen-year-old FAITH is caught sneaking back into the house after being out all night, her older-brother & guardian EDDIE grounds her and tasks her with sorting through her recently-deceased mother’s belongings as punishment.
While carrying out her punishment, Faith finds a strange pendant hidden amongst her mother’s possessions. She slips the odd thing into her pocket, keeping it hidden from Eddie.
Faith sneaks out of the house defying Eddie’s grounding, and meets-up with KIARA, her best friend, who drives them to an abandoned house to rendezvous with MICHAEL, Kiara’s boyfriend, and PAUL, the boy Faith kissed for the first time the night before her mother passed-away but hasn’t seen since. Once alone, Faith and Paul pick-up where they left-off, while Kiara & Michael hook-up in a nearby room. The pendant begins to glow. Faith sequesters herself with the pendant and touches it, and immediately slides through a portal and lands in a boat in an Amazonian landscape. She meets a girl (later nicknamed THEGIRL) and an old man (nicknamed THE SILVER HAIRED MAN) who shows Faith about this world, ENLITRA, and the gift inside of her to derive and bend energy. TheGirl teaches Faith how to shape energy (En), and cautions her about a life-siphoning other-worlder (Him) who plans to consume all the En in the universe. Faith explores her energy-ability with TheGirl’s guidance, but is sent home abruptly for her own safety when He intervenes. Faith returns home disoriented as if waking from a dream, gone for hours while her friends were searching for her.
The next day, Faith starts her first job at a local drugstore, a favor called-in by Eddie, but while there, a dark force blows through upending products from the shelves and laying waste to the interior of the store. Faith’s boss is outraged, blaming Faith for the damage, forcing Faith to run from the scene instead of waiting for her brother to bring her home. Faith watches the drugstore from afar to see Eddie’s arrival and his irate reaction to the mess, and its then that Faith decides not to return home tonight. TOMAS offers her a ride and Faith accepts, going only to pick up a few things while Eddie is at the drugstore.
Later, Faith meets up with Paul who calms her with dinner, followed by an electric make-out session in the front seat of Paul’s parked truck. Mid-kiss, cars from the lot start to shake around them. “Earthquake?” Faith wonders, until she realizes it is she moving the cars with the powers discovered on Enlitra, now wildly out of control. After some effort, Faith reigns in her abilities in order to hide them from Paul, and they spend the night in Paul’s truck.
Next day Paul convinces Faith to call her brother to smooth things over, and she does. On the phone with him later in the day, she overhears an altercation between Eddie and a visitor. The call drops. Faith, getting a ride from TOMAS from school, urges TOMAS to rush to the house. When Faith and Tomas arrive, they find it empty except for an inky message scrawled on the wall. Eddie’s kidnapper has left a clue that leads back to the abandoned house.
Faith & Tomas rush to the abandoned house to rescue Eddie, and other friends arrive to help as well including Kiara, Michael, MELODY & GERARD, but all are unable to stop Him. Gerard loses his life. Faith desperately tries to connect to the TheGirl through the pendant for help, but learns only she can fight Him. He tries to break Faith by taunting her about her dead mother, using her brother as a host, and revealing a secret that connects Faith to Enlitra…He is her maker, and her mother died by his hand. Faith, angered, pummels Him with energy molded into fireballs. She sets the abandoned house ablaze and molds energy into an eagle as she had practiced on Enlitra, and escapes to the air. From above, after battling back and forth, an exhausted Faith traps Him in an unbreakable box before plummeting to the ground.
Faith awakens in the hospital. Kiara & Michael visit confirming they escaped without injury, but report that Paul has amnesia; Eddie is in intensive care, and there is no news about Tomas. Faith’s final thought before she succumbs to numbing pain-meds pumping through the IV is, “Where is the box?